Coach Zach Leger ‘03 has been named the new Head Football Coach for St. Michael the Archangel High School beginning in the 2021 season.

Coach Leger, previously the Offensive Line Coach for SMHS, possess significant involvement in the sport of football. He not only has four years of high school coaching under his belt, but also has five years of middle school coaching experience. Having played as a former Warrior during his high school football career, Coach Leger was granted a full athletic scholarship to play as an offensive lineman for the University of Louisiana.

As a former collegiate football player and already having a role in the SMHS football coaching staff, Coach Leger is well adept with what it takes to build a program. “It requires hard work and dedication. I want my athletes to realize they have to push themselves and do more than the person next to them,” he shares. “My ability to play at the next level was a reflection of this school and my coaches at the time pushing me to go beyond my comfort level. For our program and kids to be successful, it will require just that.”

Coach Leger shares that a main goal of his next year, which stems from his time as a player at SMHS, is to capture the schools first ever playoff victory. “I was part of one of the teams who played in the first playoff game in school history in the year 2000 against Salmen High. There is no greater goal of mine now than to coach this team to capture the school’s first ever playoff win.” Along with this milestone, Coach Leger admits that another important goal is to grow the program as well. “We want to be able to take the program to the next level. The foundation and groundwork already exists. We must become a competitive and consistent force in our division and district. I want to grow the program by pushing my team to win more titles and open them up to college recruiting.”

Coaching is not the only strong suit that Coach Leger provides as a member of the St. Michael community (though he has been the SMHS Head Track and Field Coach for the past five years). He is head of the St. Michael Engineering Program and head of the Multimedia Department on campus. He also has plans to implement a multimedia production class next year and was named the 2019 Alumni of the Year.

Athletic Director, Robert Smith, says Coach Leger is an outstanding fit for the position. “We knew he was the best choice with his experience and insight about the game and our school. He brings a wealth of knowledge, and it is great to have someone on staff that we know can continue to grow and develop the program, while also promoting excellence in our young men on and off the field.”

In closing, Coach Leger shares his excitement for the future of the SMHS football program and his gratitude for the support and opportunity that has been presented to him. “As an alumnus who played football here, I have always wanted to give back to my alma mater. The ability to come full circle - from a player, to assistant coach, to now head coach - is an opportunity I did not want to pass up,” explains Coach Leger. “I am extremely grateful for this opportunity from my alma mater. I am excited to step into this role and it goes without saying that I would not have been where I am today without the support of my parents and family. I look forward to making them all proud.”

Coach Leger is married to Michelle Leger, the SMHS Head Dance Line Coach. They have two children, Caroline who is seven and Easton who is two. 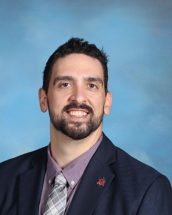