Alumnus Alex Landry ‘17 received the Agent of Change Award at the 2021 Love Purple Live Gold Award Ceremony on April 6. This accolade, which recognizes an LSU student who uses strong leadership skills to identify existing social issues and advocate for change through programs or service opportunities that educate and engage the LSU community, was presented by LSU’s Campus Life Committee.

Landry, who is also President of Alpha Epsilon Delta (LSU’s premedical honor’s society), implemented a program called “Pandemic Peers” at the start of the 2020-21 school year. The program, which partners AED upperclassmen with freshmen in the Science Residential College, is meant to help guide incoming students through the premedical process as well as give them a chance to meet new people. “There was a big problem with mental health at the beginning of the school year because of the pandemic and not being able to do normal things around campus,” Landry shares. “Living in the dorms and not being able to have that typical college experience, things just looked a lot differently. Pandemic Peers is meant to give freshmen someone to talk to who has been through the process - from taking the M-CAT to applying to medical schools - and help them engage socially as well as in service and academics.”

The need for a program like this around LSU’s campus was not unnoticed by faculty. Landry’s immunology teacher, Dr. Hale-Donze, reached out to him after class one day about motivational problems she was seeing throughout her classes. “Dr. Hale-Donze approached me at the end of a class and told me about this problem she was having in seeing motivation from her students. A lot of students were struggling. She told me there was a need for change,” he explains. “That is when I began bouncing ideas off my executive board members at AED. From there, Pandemic Peers started with just one meeting on campus where everyone could come together to meet and eventually the program took off. Since then, it has been a great opportunity for our AED members to help out our school community.”

Landry is now in his senior year at LSU where he is a dual degree candidate in biochemistry and pre-professional chemistry. He credits St. Michael High School for piquing his interest in science and medicine. Though he had never thought about becoming a doctor while in high school, once his biology teacher brought it up, the idea never left his mind. “When I was at St. Michael, Dr. B. literally asked me ‘Have you ever thought about becoming a doctor?’ and I had not. But after thinking about it I realized that it might be a career that I could embrace,” shares Landry. His time on the cross-country team while in high school also nudged him toward a medical vocation. “Another thing that happened in high school was that I noticed that injuries were derailing my cross-country team’s championship aspirations. I wanted to do anything I could to help out with that, so I took it upon myself to research different stretching and warmup techniques,” explains Landry. “I wanted to find ways that we could keep our mileage but reduce injuries by becoming more conscientious of how to treat our bodies and how to properly warm up.”

While at LSU, Landry also attended a medical mission trip to San Ignacio, Belize. From that point on, Landry’s says his fate in medical work was sealed. “When I went to Belize and helped care for local villagers there, the people were so appreciative, and I found it extremely rewarding. I knew after that, that I must become a physician. It was one of those key moments where I thought ‘Yeah. This is what I want to do.’”

Landry was the 2017 valedictorian at St. Michael High School as well as the recipient of the St. Teresa of Calcutta Service Award his senior year. He was also a captain of the cross-country team. This year, as a senior in college, he was accepted into three medical schools (thus far) and plans to specialize in emergency medicine. “Helping people is rewarding,” he says simply in closing. “St. Michael’s emphasis on giving back to the community through service really pushed me to get out into the community at LSU. I am so thankful for my high school experiences as well as my professors at LSU who have helped me along this journey. I am also thankful to have AED as a platform for beginning the Pandemic Peers program. Without all of this I would not be where I am today.” AED also received the Commitment to Change award from LSU’s Campus Life during the same ceremony where Landry was honored as the Agent of Change. 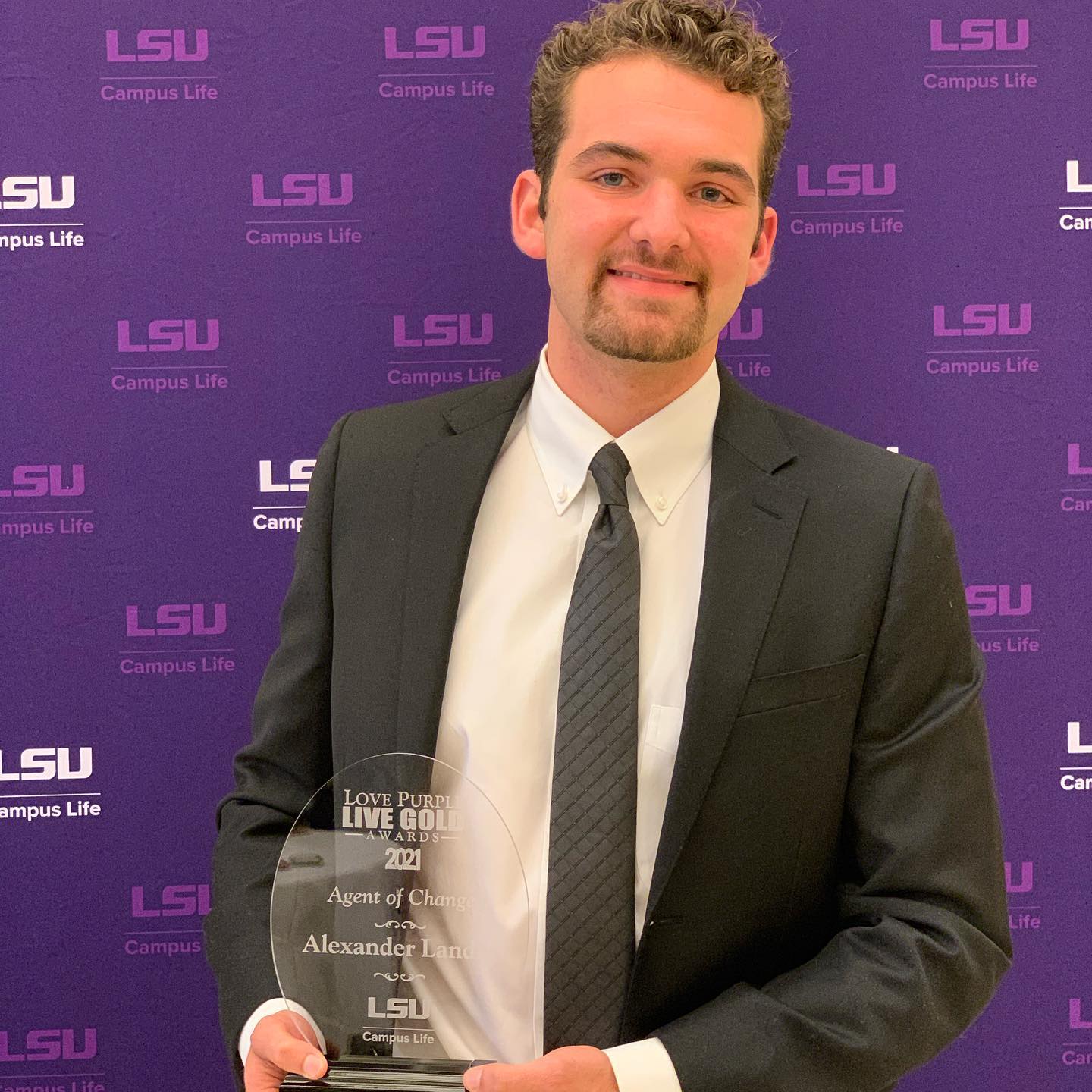